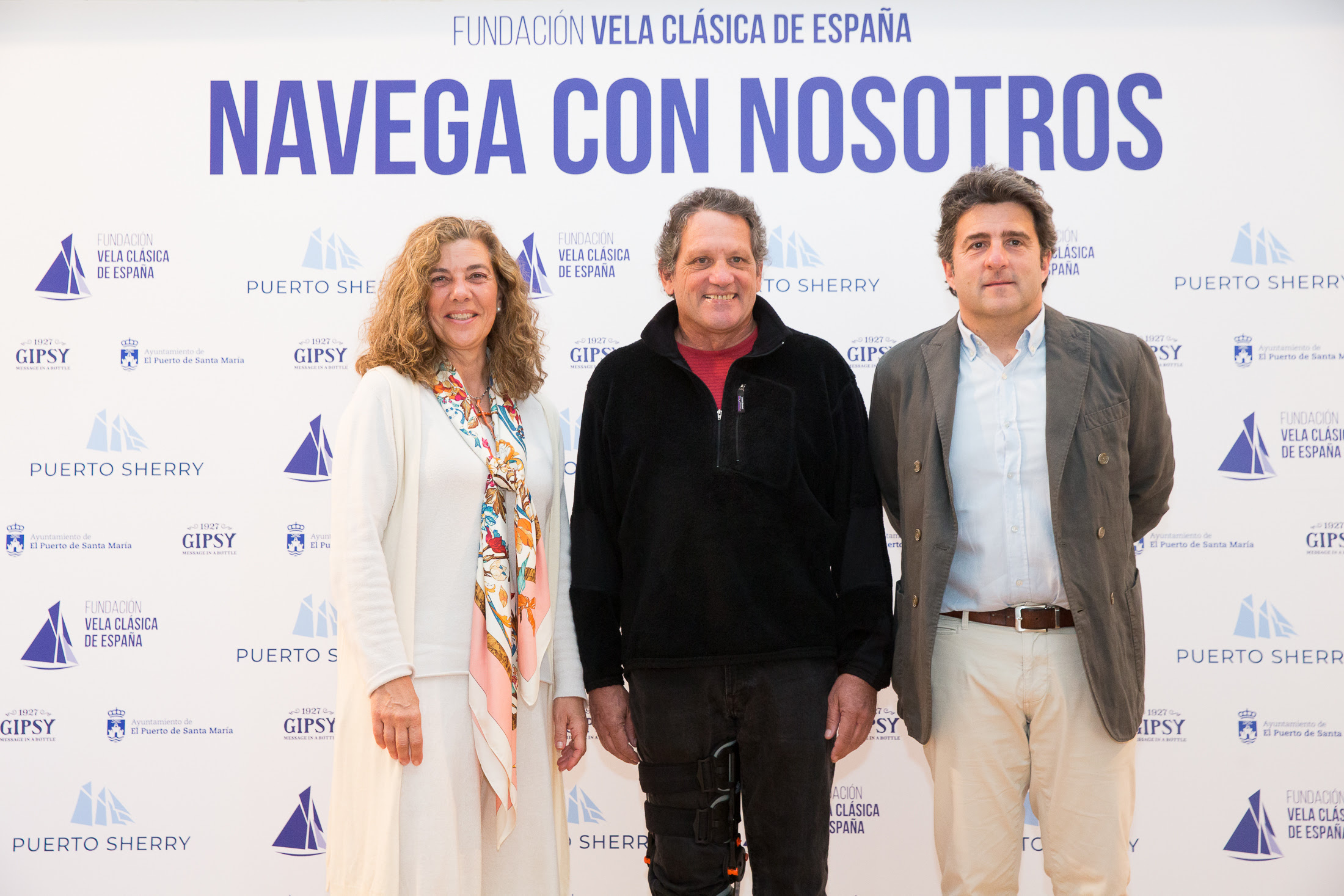 16 Apr Joan Vila, the best sailor in the world, impressed a packed room in the first interview of the Navega con Nosotros series of the Fundación Vela Clásica de España.

Posted at 14:52h in Sin categoría by PuertoSherry

On Saturday 9th April, one of the most eagerly awaited events of the year began in the Columbus Hall. The series “Navega con Nosotros” began with the intervention of Ricardo Rubio, patron of the Fundación Vela Clásica de España, who highlighted the importance of the conservation of classic boats and made the Foundation’s fleet available to donors. Then Nicolas Figueras, director of Puerto Sherry, welcomed Joan with admiration, it was a pleasure to receive one of the best sailors in the world, winner of the America’s Cup in Valencia 2007.

After these brief introductions and some basic notes from Joan about the most important knowledge he has learnt during his long voyages, the most important moment came: the interview. Pedro Sardina conducted the interview in an atypical way, revealing some of the untold secrets and anecdotes of the sailor. Anecdotes that could then be discussed among the guests over a gin and tonic of Gipsy Gin, gin from the Gipsy 1927 brand, a partner of the event.

Eight Volvo Ocean Races, six America’s Cups, Jules Verne Trophy… An impressive nautical curriculum that leaves no one indifferent. But who is Joan Vila really, who does he like to have in his crew, what are his greatest fears, and what are his greatest achievements? Questions that he answered without delay in front of an attentive and expectant audience. Joan wants a united and decisive crew, he is afraid to hear the “man overboard”, he is happy to know that he has been among the first in the most important stages and he always brings coffee, lots of coffee. “When the big teams started calling me to sail, I realised that I was going to dedicate myself to an unusual profession and that I was going to have an unusual job,” he commented, smiling, satisfied to have the dream job, the desire of any sailing and adventurous heart.

He also revealed that he has worked with teams with budgets of over 100 million euros and met important people in peculiar situations: “When I signed up for Alinghi, Bertarelli asked me who I was and I told him I was the navigator. I asked him who you are and he said, quite naturally, ‘the owner of all this’.

There was also a question about the next America’s Cup 2024 in the sailor’s homeland, who confessed that he was “in talks with Alinghi to be able to participate in the America’s Cup to be held in Barcelona in 2024”.

The event organised by the Fundación Vela Clásica de España and Puerto Sherry exceeded expectations. A good start for the “Navega Con Nosotros” cycle that will bring great professionals from the nautical and sporting world to the Bay of Cadiz every year.

We look forward to seeing you at the next event!